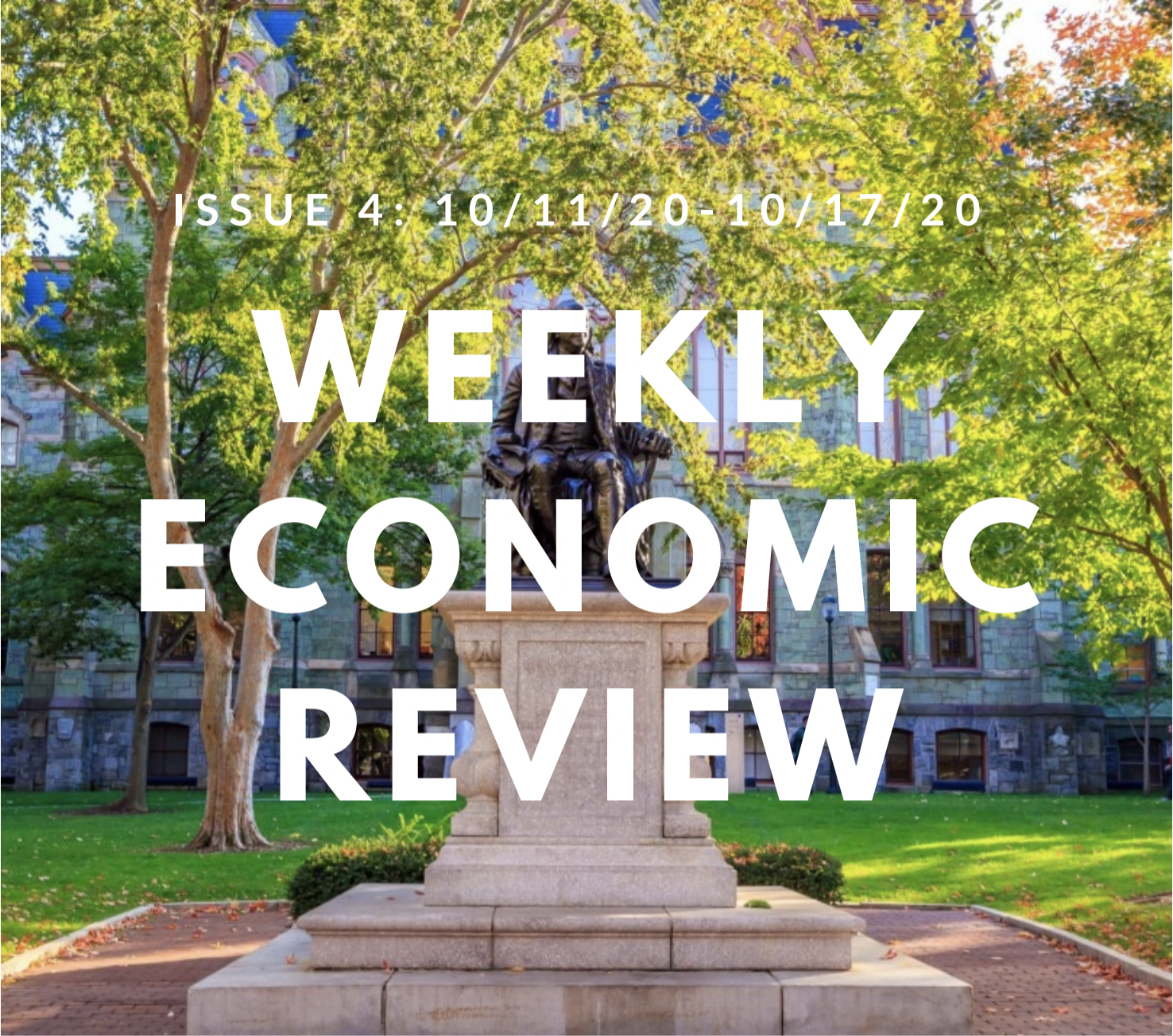 A Turbulent Week for Markets as the Election Creeps Closer

This week presented plenty of volatility for markets, as investors continued to weigh pandemic headwinds. The week started off strong, fueled by anticipation of Q3 earnings and continued excitement surrounding the iPhone 12 keynote (AAPL -1.04% on the week) and Amazon Prime Day (AMZN -2.27%). However, coronavirus concerns reemerged Tuesday, as vaccine trials by Johnson and Johnson (JNJ -2.3%) and Eli Lilly (LLY -6.83%) were paused. With Europe seeing record coronavirus cases, investors are weighing the potential for another US wave. With cases back on the rise, investors may have priced in a rise in cases but perhaps not a second shutdown or a third wave.

Wednesday continued to drive concerns as US Secretary of Treasury Steven Mnuchin and Speaker Nancy Polosi reiterated concerns over the potential of the nearly $2 trillion package passing before the end of the year. The White House remains a strong proponent of the package, agreeing Thursday to include the Democrats’ National Coronavirus-Testing Strategy, but Senate Republicans remain more stubborn. With Mitch McConnell saying he wants a package closer to $500 billion, investors are closely following the progress of this deal given Jerome Powell’s warnings that inaction could be “tragic” for the economy. To display this point, jobless claims rose by 53,000 to 898,000 last week, showing that economic recovery may be stagnating.

However, Thursday and Friday brought some good news to keep markets around even for the week. On Friday, retail spending data showed a sharp rise of 1.9%, over doubling the anticipated growth of 0.8%. Moreover, Pfizer (PFE +3.58%) announced that if vaccine trials go well, they could request emergency authorization by the third week of November. However, it ruled out rushing the request before the election.

Fixed Income Notes
The ten year note fell this week, as investors came back to bonds in wake of coronavirus concerns. However, a democratic sweep of Congress and the White House, a scenario looking increasingly likely from new polling numbers, would bring yields back up. Experts believe this would generate record stimulus packages from deficit spending, meaning the issuing of new bonds, an increase in inflation and interest rates, and overall making bonds more unappealing. For the short term, look for bond yields to rise if a stimulus package makes progress in Congress.

In other news, corporate bond issuance is slowing down, as companies are starting to think about refinancing into longer-term debts. Spreads on corporate bonds are reaching pre-pandemic lows as investors continue to look to higher yield credit investments. Moreover on this point, China issued a $6 billion bond sale for international investors. With a surging Chinese economy and higher yields than equivalent US treasuries, demand was high. Finally, in Europe, a resurgence in cases pushed German bond yields to pandemic lows. Europe’s situation will be good to monitor going forward.

Market Commentary
After this week’s market activity, the S&P and the Dow have now gone up for the past three weeks and the Nasdaq has gone up for the past four. That said, the budget deficit hit $3.1 trillion for FY 2020, which is more than triple what it was last year. With government stimulus apparently not forthcoming, many more people are still struggling due to the effects of the pandemic.

Another recent trend that is quite interesting is that Q3 business applications increased by 77.4% from Q2. As more people are out of work and existing businesses are shutting down, there is an increased incentive for people to attempt to start their own businesses. Moreover, with the Fed keeping interest rates very low, it makes it easier for people to borrow money to invest in their businesses. It will be quite interesting to watch how many of these new businesses “make it” and what their effect is on the broader market landscape.

Industry Overview
Banks underpin the financial markets and play a central role in the US economy. Through their depository functions, banks allow consumers to save, and through their lending branches, they provide financing to individuals and businesses. Businesses borrow to obtain working capital, finance projects, and in recent months especially, pay employees. Individuals borrow to finance large purchases like homes, vehicles, and student loans.

Covid
The banking industry has performed very poorly through the pandemic. As of October 17, the KBW Nasdaq Bank Index has fallen 31.58% in 2020, lagging far behind the S&P 500’s 6.92% gain. Near-zero short-term interest rates have thinned lending margins– the largest source of revenue for most banks– and additionally, high unemployment rates have forced many banks to write off billions in loan losses. The Federal Reserve has also prohibited banks from buying back shares and capped dividend payments through 2020.

Despite the setbacks, banks have weathered the coronavirus economy and have remained profitable. The five largest banks reported 23 billion in Q3 earnings. Banks have also provisioned less for loan losses compared to previous quarters, but the economy is far from recovered and the future remains uncertain. Sustained high unemployment and stagnant covid relief talks from Congress could pose additional threats to banks’ financial strength.

Future Direction
Although banks fared relatively well in Q3, it will be some time before the industry returns to normal. The Federal Reserve has indicated that interest rates will remain low for several years. Thirteen of the seventeen officials in the last policy meeting in September expected to keep rates at the current level through 2023, which continues to harm lending margins. JPMorgan also estimates unemployment to remain above 7% through 2021, signaling continued bad loans in the absence of aggressive government action.

While there weren’t many recent deals to highlight for this weekly economic review, this section will explore what often prevents large deals from being closed quickly after being announced: regulatory scrutiny. The specific deal we are going to look at there is Google’s $2.1 billion purchase of wearables technology company Fitbit announced on November 1st, 2019.

The deal initially made sense for both companies. From Google’s perspective, in the second half of the 2010s the company made a significant push into hardware technologies. Products such as the pixel phone line, Chromebook, google home, and the google pixel buds show that the company is trying to make a push for an ecosystem that attempts to rival that of Apple. The next logical product then, is some sort of wearable device similar to the apple watch. Yet as such a niche product, it makes sense to buy a company that already works in that space rather than Google developing the whole product themselves. For FitBit, the deal serves as a return to glory for the brand. As one of the first entrants into this niche market, Fitbit was once the global leader. Yet as of Q1 2020, their market share has plummeted to 3% due to the emergence of the aforementioned Apple Watch, as well as similar products from Xiaomi, Samsung, and Huawei. The hope is that with this sale, the brand will benefit from inclusion in the Google ecosystem boosting sales.

However, the deal has been unable to close due to regulatory scrutiny mainly from the EU and Australia. The worry continues budding anti-tech sentiment among politics and centers around two words: big data. With FitBit, the argument is that Google will now have access to consumer’s health and location data, further increasing their domination of consumer data. This could then be leveraged to not only create privacy concerns, but also essentially create a data monopoly, and therefore advertising, monopoly. Consumer groups are concerned as well, saying “Google could also use Fitbit’s data to establish a commanding position in digital and related health markets, depriving competitors of the ability to compete effectively.” Regulators specifically have been in contact with competitors to investigate this claim, asking them how they feel the acquisition would affect their business and market.

In response, Google has attempted to reframe the deal. Primarily, they have been marketing it as a deal “about devices, not data” in line with the analysis mentioned above. Additionally, they have made a number of concessions to sweeten the deal, such as saying that “Fitbit health and wellness data will not be used for Google ads.” These revisions were in part a response to the feedback the commission received from its contact with competitors mentioned above. They also have further discussed how the deal makes sense for the market, saying that it is “highly crowded” and boosting FitBit through inclusion in the Google ecosystem will actually increase competition (It is important to understand that this is a different market than the ones that regulators are investigating for anti-trust). It is now up to European regulators (who have extended the deadline on its decision to January 8th, 2021) to decide if this deal will be acceptable for their respective countries or not.