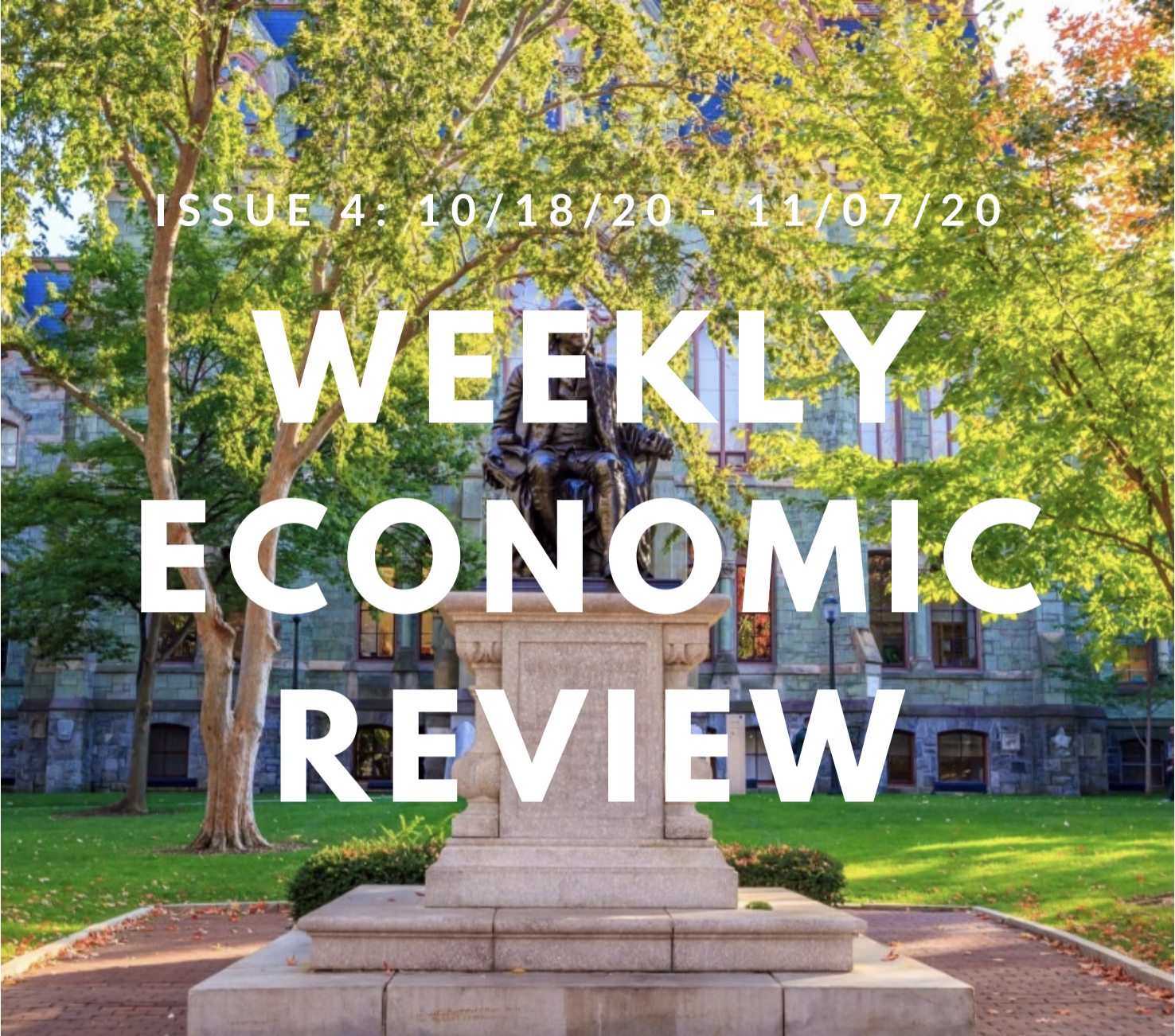 The stock market skyrocketed as investors were expecting a new president-elect. Moreover, the prediction also drove up bets in derivatives across the bond market. For months, investors have been betting on the volatility of the market around the presidential election until one day ago when the result seemed to be clear. Investors predicted that if Joe Biden were to be elected, it would lead to a giant fiscal rescue package that would boost the economy and cyclical companies that would benefit from such a deal.

In the US market, although stocks wobbled on Friday, the S&P 500 and Dow Jones Industrial Average gained 7.3% and 6.9%, respectively, for the week. The tech-heavy Nasdaq advanced 9%. All three had their best weeks since April when U.S. stocks were first rebounding from the COVID-19 pandemic.

The bond yields were lower as prices have risen, which drove investors to invest in riskier assets like stocks. The yield on the 10-year Treasury note fell this week to 0.821%, falling the most in a single week since September. 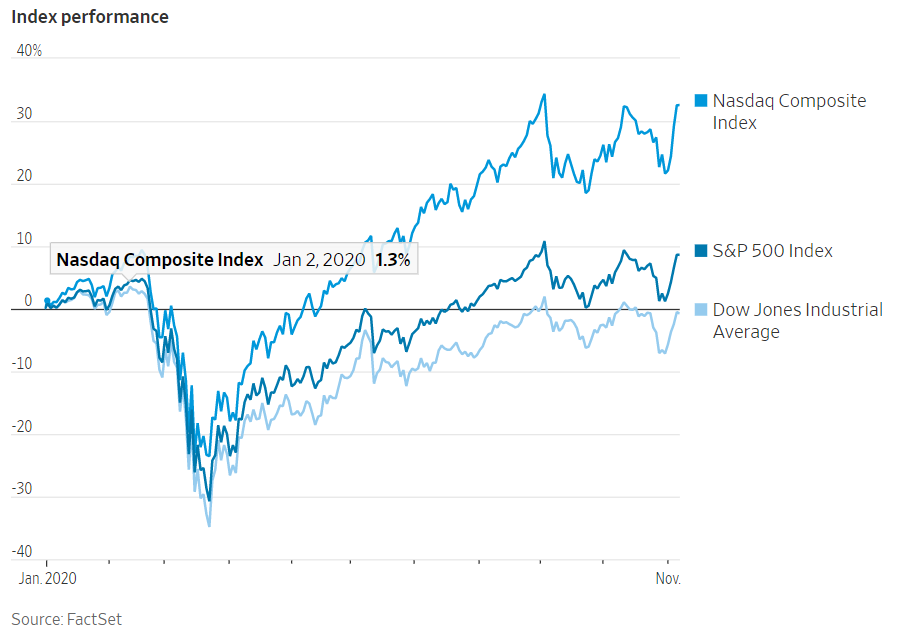 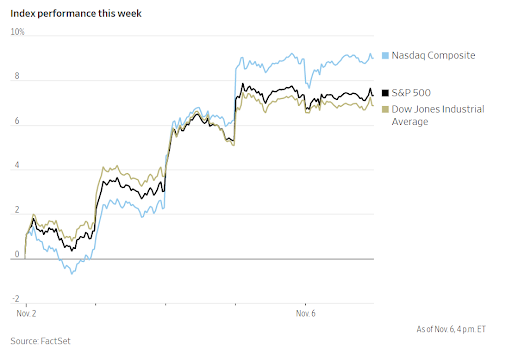 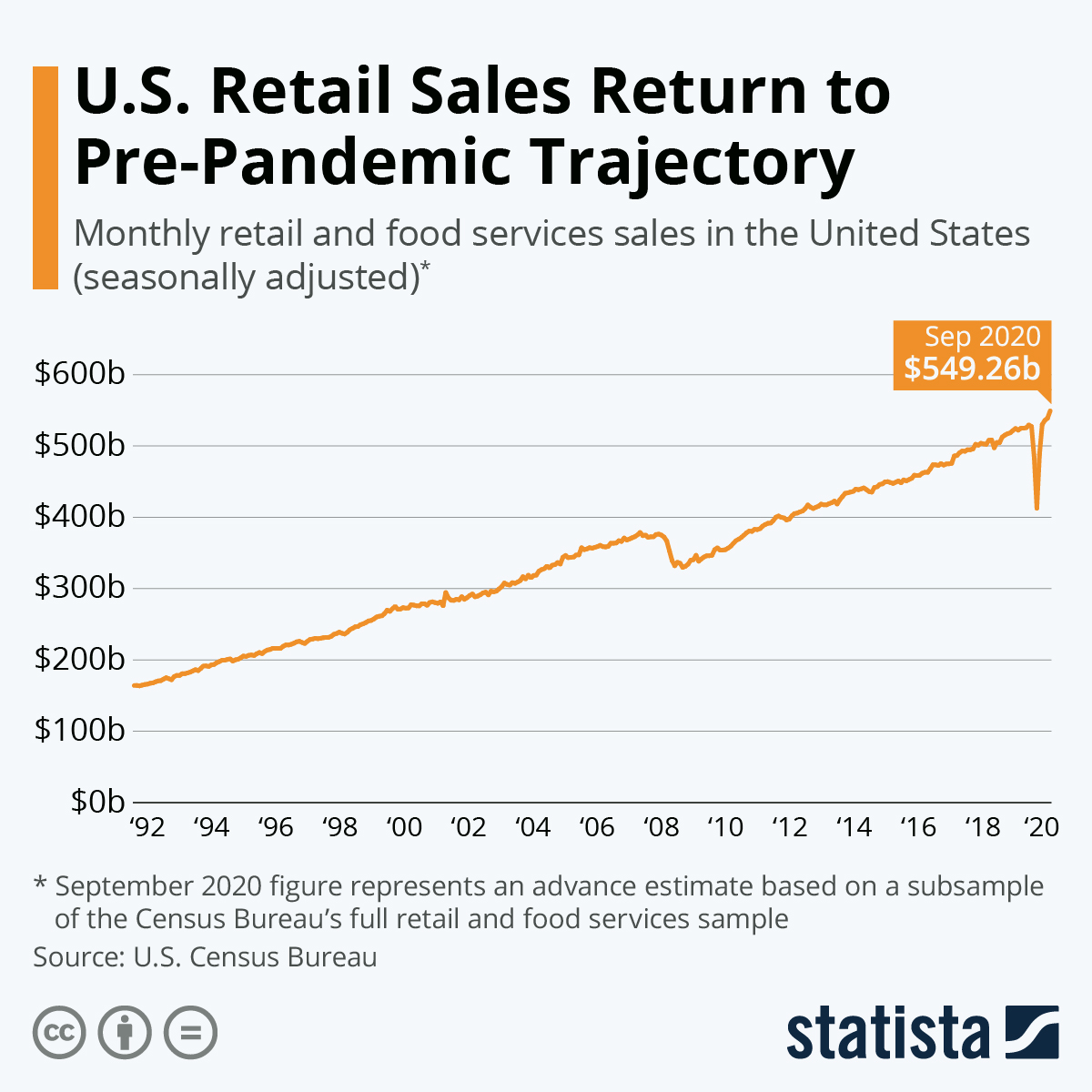 With consumer spending heavily contributing to GDP and acting as a key indicator of economic growth, the COVID-19 pandemic has made the analysis of the consumer retail industry requisite.

These figures communicate two key takeaways: (1) consumers shy away from face-to-face interaction, and (2) even amidst a pandemic characterized by modest job growth and fluctuations in personal income, consumers are motivated to continue spending on goods, aided by larger savings in April 2020.

Q4 Prospects: Riding on the coattails of record high consumer retail growth in Q3, much of the future in Q4 is contingent on the future of the coronavirus pandemic and its management under the Biden Administration. As the United States is currently facing another nationwide coronavirus outbreak, consumer retail spending is likely to decline due to increased aversion of in-person social interaction. Although the future is stained with high uncertainty, broad trends within consumer retail include a higher dependence on contactless transactions with an emphasis on health and safety, remodeled supply chains to accommodate for a decline in demand at brick-and-mortar locations, and developments at the intersection of AI and ML tech to enhance the consumer experience.

Earlier this week, the S&P 500’s industrials sector dropped 2.9% in what was the worst day for stocks in over a month. The resurgence of coronavirus hospitalizations with record-high new cases in the US, as well as exhausted hopes of a new stimulus, certainly precipitated concerns of new lockdowns as we have been seeing in Europe.

More specifically, China announced sanctions against US defense companies in response to weapons sales to Taiwan. In addition to those involved in the $1.8 billion deal approved by the US State Department, aerospace and defense firms were all mentioned. Their stocks fell by over 3% with Boeing falling 4.4%, Raytheon dropping 4.3%, and Lockheed Martin down by 3.2% at intraday lows. The Chinese foreign ministry spokesman, Zhao Lijian, stated that these actions were “necessary measures to safeguard national sovereignty and security interests," however, neither their severity nor timing was clarified. The news took a large toll on the Dow Jones industrial average which fell by over 800 points as it is more heavily skewed towards industrials than its counterparts. 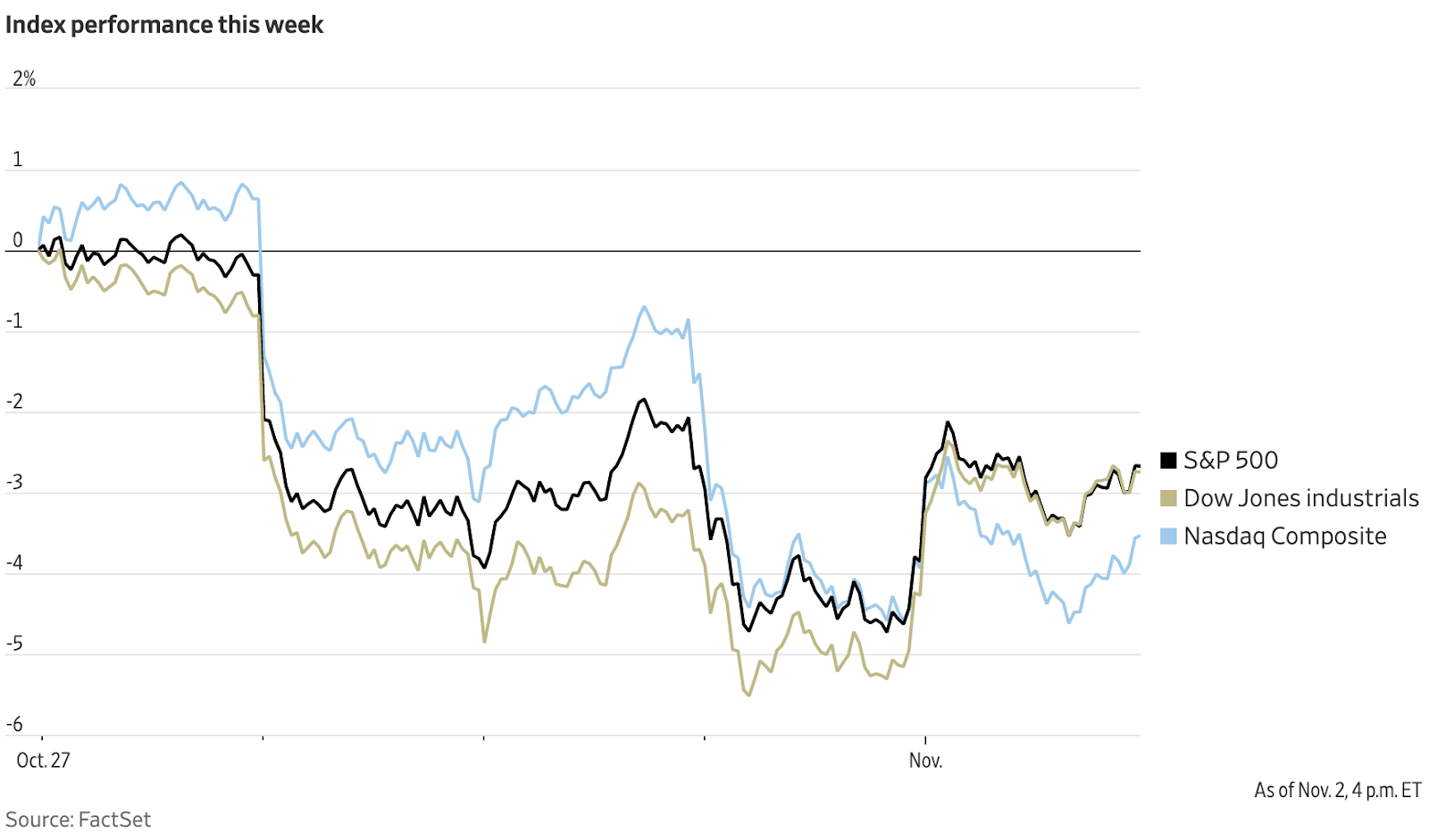 At the same time, a wave of industrial earnings was released. Driven by lower equipment demand across all regions and segments, industrial machine manufacturer Caterpillar posted a 54% decline in Q3 profit. Stanley Black & Decker had a mixed quarter as it fell short of revenue estimates but reported over-performing profits. Strong personal-safety equipment sales were behind 3M’s encouraging earnings report as sales from its safety and industrials division rose by 6.9% YoY. More importantly, sales from its healthcare segment grew by 25% and were attributed to gains in “medical solutions, separation and purification, and oral care” equipment. 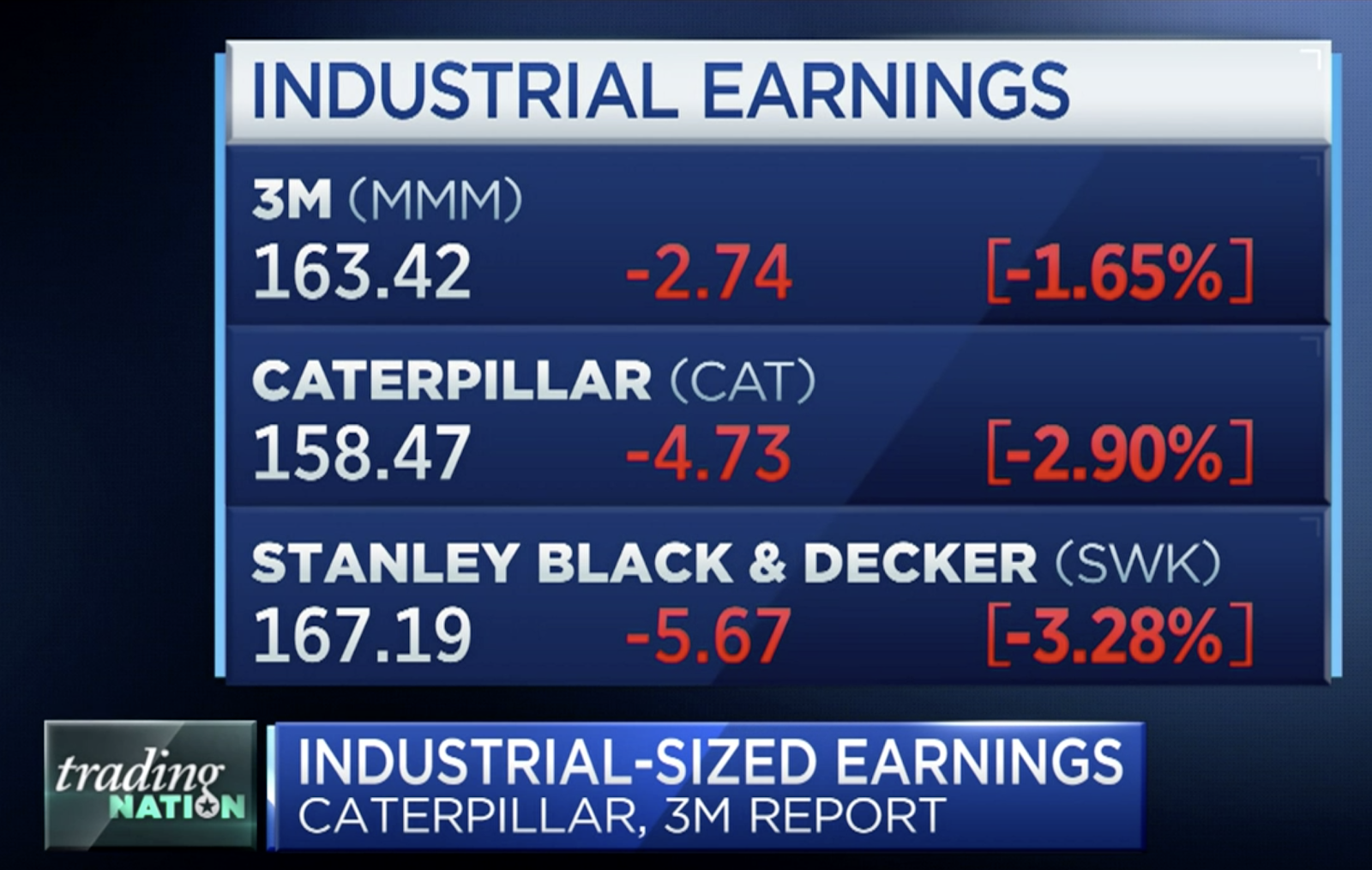 The outcome of the presidential election and infrastructure spending plans laid out by either party may lift the industrials sector, which has been a leading player in recovery trends since the March market low.

Oil and Gas Sector: Uncertainty Persists
Investors are cautiously watching oil and gas companies as the US presidential election approaches, with changes in energy policies attracting significant attention. While stocks in this sector offer sizable dividends, share prices remain low despite an overall market recovery throughout the last couple of months. The Energy Select Sector SPDR Fund (XLE) – which tracks top oil and gas companies – has declined over 60% since 2018 and continues to underperform crude oil and the S&P500. In fact, energy shares have performed the worst of any sector since May 2018, leaving Chevron (CVX) as the only oil company left in the Dow Jones Industrial Average (Salesforce.com replacing Exxon Mobile (XOM) this August). 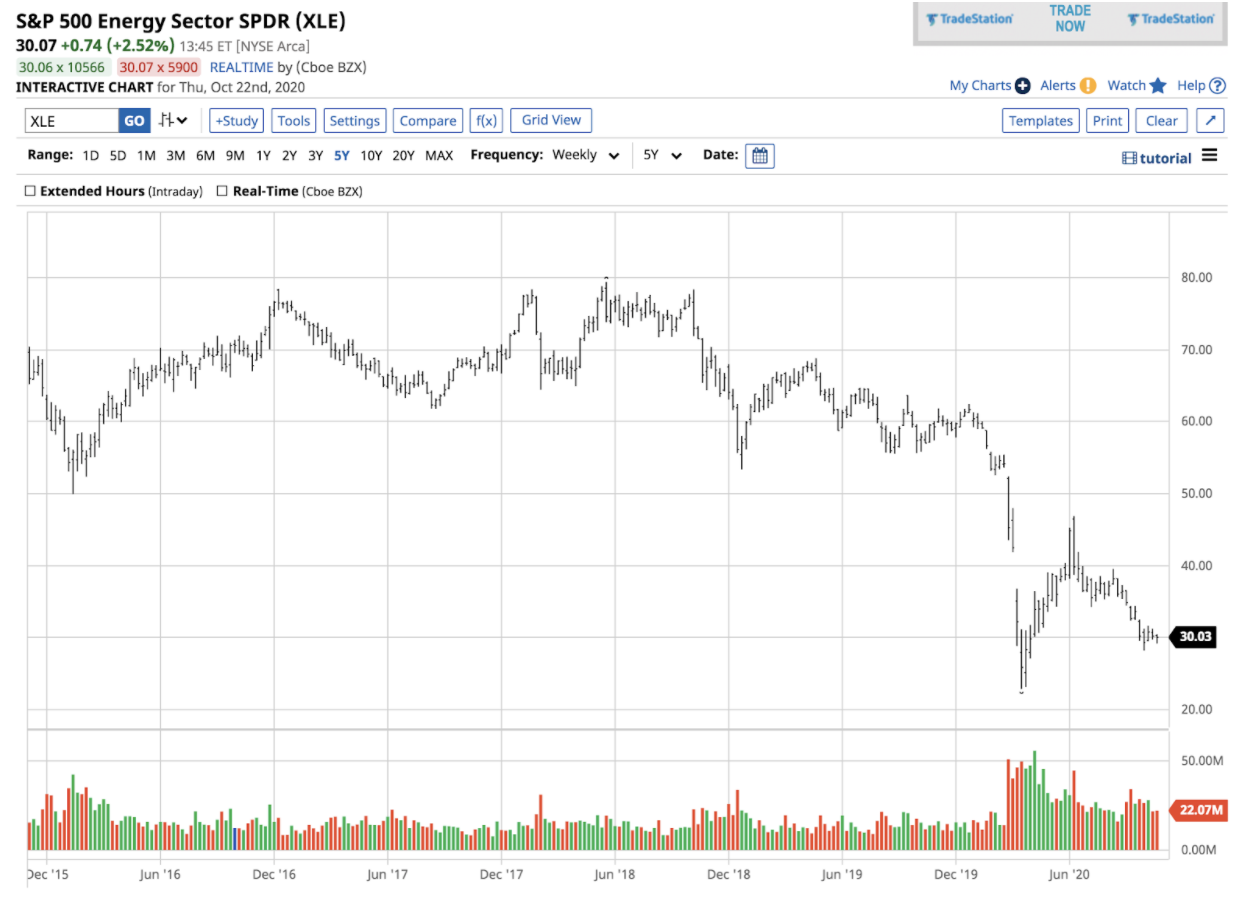 As countries and businesses slowly shift towards alternative energy sources, oil and gas firms must navigate an evolving energy landscape where their current business models fail to reflect a future in clean energy. Although XOM and CVX, among others, are trading at a generous discount compared to stocks in different sectors, the outcome of this election will likely determine the prospects for these firm’s shares in the near future. While a Trump administration will presumably support the industry through fewer regulations, a Biden administration plans to do the opposite, suggesting more headwind for these firms in 2020 and beyond.

Solar Stocks Shine Bright
In contrast to their fossil fuel counterparts, solar energy stocks are experiencing rapid growth. Although many initially expected the pandemic to deter this sector significantly, solar companies have proven relatively unscathed, with global solar projects proceeding as projected. Additionally, with polls suggesting a Biden presidency, solar stands to gain considerably through increased government subsidies towards renewables and tightened restrictions towards traditional energy sources. While the election will have a considerable impact on solar shares, investors have reasons to be optimistic beyond politics. The sector has seen significant improvement in financial performance, with top players seeing relatively stable revenues and better profit margins. Moreover, as the sector continues to lower costs, solar is becoming more competitive with fossil fuel – a trend that is expected to continue long-term. Being a key player in the renewable energy revolution, solar companies are looking for growth opportunities in establishing the future of energy, and investors are excited to bet on their success. 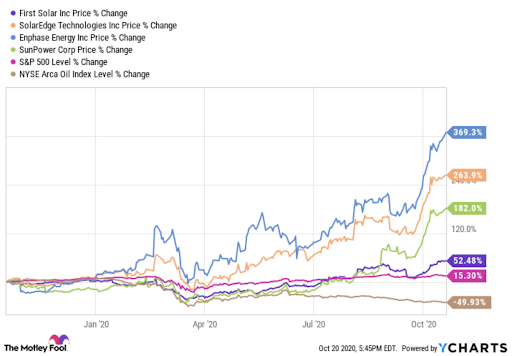 The world’s largest IPO for the Ant Group in China was suspended on Tuesday night in Shanghai and Hong Kong Stock Exchanges, causing uncertainty over the fintech industry in China.

The Ant Group, which is an online payment processor and financial lending company, was set to raise at least $34.4 billion through dual listing in Shanghai and Hong Kong. It was supposed to be the largest IPO in history, surpassing Saudi Aramco’s IPO with a value of $29.4 billion in 2019. This IPO movement also suggests a tightened relationship between China and the US, forcing more Chinese companies to be listed in its domestic markets for primary or secondary listing.

However, a company this large in size with more than 7 billion users globally also brings concerns to the regulators regarding the opacity of Ant’s operations and its influences on the Chinese payment and financial markets. The company not only manages more than $17 trillion in digital payments but also manages China’s largest mutual funds.

Regulators were also concerned about its label as a technology company instead of a financial firm, allowing them to get away with capital requirements and leverage ratios that banks have to ollow in China. Moreover, a tech company often has a higher valuation.

The suspension was announced right after the major owner, Jack Ma, had a meeting with four financial regulators from the People’s Bank of China, the China Banking and Insurance Regulatory Commission, the China Securities Regulatory Commission, and the State Administration of Foreign Exchange on Monday. On the same day, the regulators also released a set of new rules for microlending in China. The details of the meeting were not disclosed, casting uncertainties on the new valuation and new date for IPO.

IPO Market Remains Hot
The IPO market has remained on hold due to the uncertainty of the outcome of the upcoming United States presidential election, although it has been very strong up until now. After the election, there should be a lot more IPO activity to finish out the year strong. Additionally, there have been some positive trends still ongoing through this uncertain time. Fintech startup Upstart, a company that facilitates loans between consumers and partner banks, had a recent IPO, capitalizing on their rapidly increasing revenues, and it was most recently valued at $750 million.

Many impending highly-anticipated IPOs are expected to happen before the conclusion of 2020. At the forefront of this group is AirBnB, who is expected to make their IPO filing sometime next week. They are expected to raise $3 billion, which would make it the third-largest in terms of this year’s new issues. Another anticipated IPOs to close out the year includes DoorDash, and ByteDance is also looking to take some of its divisions public.

Visa’s Bid for Plaid Faces Lawsuit
The Department of Justice filed a suit against Visa, alleging that the payments giant was engaging in anticompetitive M&A activity. Visa planned to acquire Plaid, a financial services company based in San Francisco that is a rising fintech innovator, for $5.3 billion. The suit alleges that Visa is acting in an anticompetitive manner, and the acquisition would violate the Sherman Act, which is a United States antitrust law that regulates competition among enterprises.

The suit claims that Visa is a ‘monopolist’ in online debit and is seeking to eliminate a ‘nascent competitive threat’ by acquiring it. Plaid currently enables consumers to connect their bank accounts directly to fintech platforms, particularly online investing platforms, which is becoming very important in today’s world and certainly would make sense for Visa to uptake. However, Visa claims that the acquisition would not be monopolistic at all, citing the fact that they do not face competition from Plaid, and, instead, their capabilities complement one another. If the Department of Justice is successful and the acquisition is blocked, this will signal a very tough road ahead for Visa, which is still currently trying to further expand into the fintech region.