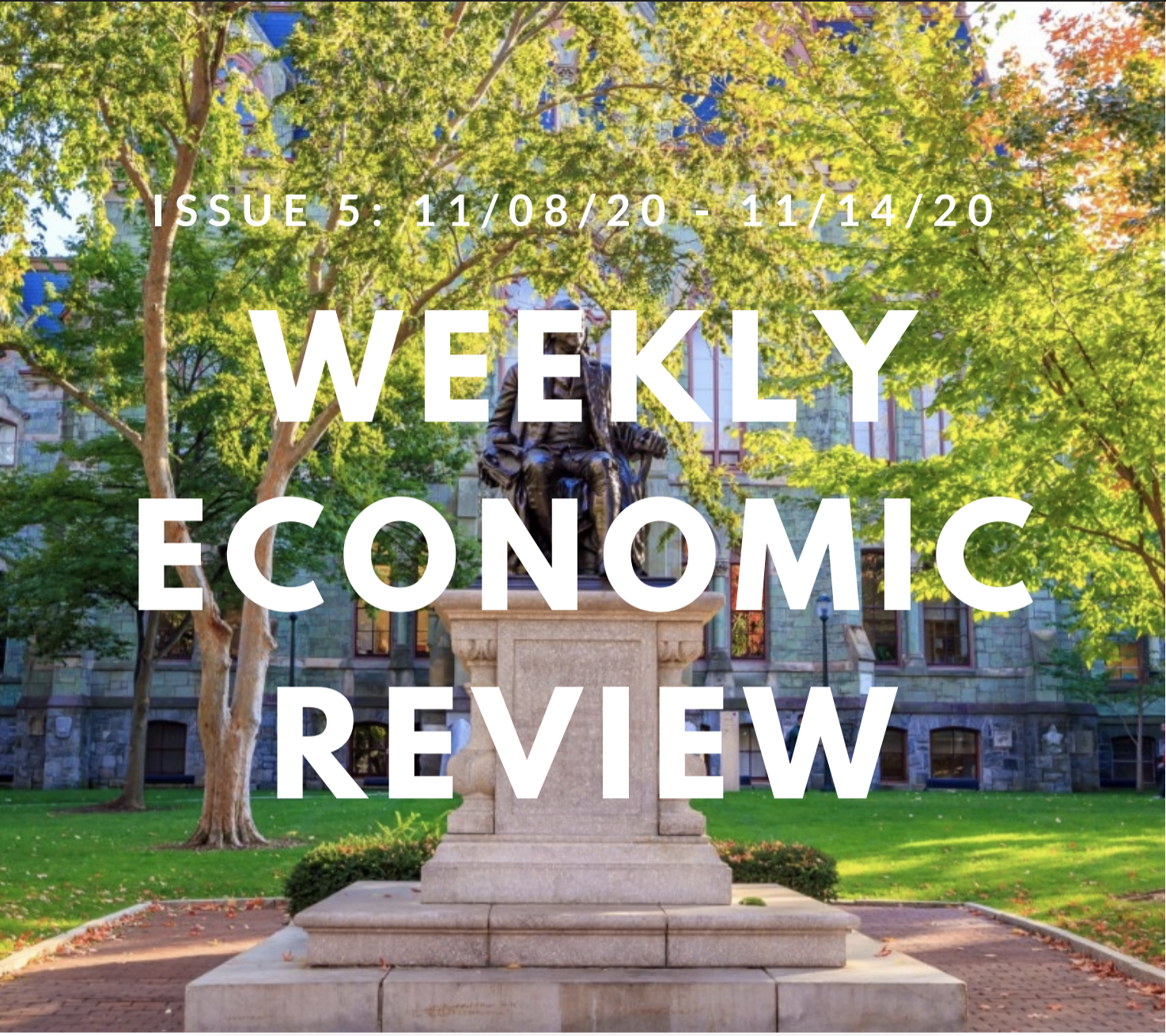 Overview
The trends in the market this week reflected both optimism following Pfizer’s announcement that their vaccine had reached a 90% success rate yet also fears regarding the large spike in COVID cases nationwide. The week began with a 1.17% increase of the S&P immediately following the Pfizer announcement, with the retail and travel industries, which had been hard hit by COVID lockdowns, rising the most. On the other hand, stocks including Peloton, Clorox, and Zoom, which have benefited from the social changes brought on by the pandemic, came crashing down. Overall, the NASDAQ, buoyed by the gains Big Tech has made over the past several months, ended the week down, while the Dow recorded a significant weekly gain.

The market has been very sensitive to any COVID-related news this year, and this week has been no different. COVID cases in the U.S. increased by anywhere between 100,000 and 200,000 cases per day this week, which stunted the market growth fueled by Pfizer’s announcement. As cases continue to spike, it will be interesting to continue to follow the lockdown measures that may be reimposed by different states and how the market responds.

Another notable trend that we have observed this week is how the markets are responding much more to COVID-related news than to developments related to last week’s elections. Political instability typically sends the markets tumbling, as it did following the 2000 presidential election, but it is clear that investors do not see Trump’s legal challenges amounting to anything. They are eager to ensure a transition of power that is easy as possible and are doing what they can to pressure Trump into conceding.

As mentioned earlier, the entertainment and travel industries made big gains this week. Royal Caribbean and Norwegian Cruise Lines rose 20.56% and 18.21%, respectively. Zoom Video Communications plummeted 19.30% this week with the vaccine news and the hope that online school and work will not be necessary in the near future.

Fixed Income
As investors place their hopes in a successful vaccine, yields on the 10-year treasury reached a 7-month high, which corresponds directly to a decrease in bond prices. That said, treasury yields are still below typical levels. As the year comes to an end, it is still looking uncertain whether Congress will pass another relief package and, if they do, what that would look like and do to the budget deficit.

In Europe, however, the ECB expressed caution regarding economic recovery, even amidst hopes for a potential vaccine. There was a heavy selloff in US and European bond markets as investors hoped to price in a brighter outlook, although this initial optimism decreased as the week progressed. There is also some worry about what these increased treasury yields will do to stock prices, which are inversely related.

Election Relief
Prospects of a split government caused healthcare stocks to jump following election night. As shown by the Health Care Select Sector SPDR Fund (+6.8% since election night), healthcare investors breathed a sigh of relief over a likely Republican Senate. Generally speaking, a divided government favors the status quo, providing potential predictability while mitigating the chance of a widespread healthcare reform. One particular bill in question was the H.R. 3 Bill to allow for fairer drug prices; however, with Republican control in the Senate (pending the two run-off elections in Georgia) and a tighter margin in the House, the bill is unlikely to see advances in the near future.

In other healthcare legislation news, Supreme Court Justices John Roberts and Brett Kavanaugh indicated their support of the Affordable Care Act, signaling that the law may be safe against incoming attacks. With Amy Coney Barrett’s confirmation on October 27, many assumed that the law would fall with a 6-3 Republican majority; however, Justice Roberts and Justice Kavanaugh’s reinforcement of the Affordable Care Act now indicates the opposite. Although the nominal mandate that requires everyone to purchase health insurance could fall, there has not been a penalty for failing to do so since 2017, meaning that removing the mandate should not have a real effect.

Vaccine Hopes With a Dose of Reality
With vaccine news driving markets this week, biotech companies were under the microscope with investors speculating over the significance of successful vaccines. While Pfizer (PFE +6.10% since last Friday) and BioNTech’s (BNTX +15.22%) announcing of 90% vaccine efficacy in their stage 3 trials made headlines early on, Moderna (MRNDA +23.88%) was a big winner as well. Experts, including Dr. Fauci, believe that Pfizer and Moderna’s similar mRNA technology bodes well for the latter’s success; Moderna is preparing to announce its early stage 3 findings soon. What makes Moderna potentially more attractive? Pfizer’s vaccine, while showing these results, has to be stored at -70°C, potentially providing a logistical obstacle, as many hospitals cannot store at such temperatures. Meanwhile, Moderna’s vaccine requires temperatures of just -4°C, perhaps easing distribution.

While investors were understandably excited about the trials, excitement cooled throughout the week as doubts emerged surrounding the logistics, including temperature, manufacturing, and distribution of the vaccine. The reality is that only one or two vaccines will not be sufficient for quick, widespread distribution; thus, the world continues to look to other companies, including Johnson & Johnson (JNJ +5.38%) and AstraZeneca (AZN+3.35%), for vaccine progress. While both companies were forced to pause over safety concerns in Mid-October, the companies believe that they are on track for widespread distribution by mid-2021.

Overall, this pandemic is a massive opportunity for biotech companies to benefit financially and aesthetically. While companies such as AstraZeneca and Johnson & Johnson promised that they would not make a profit during the pandemic, it appears that a COVID-19 vaccine could be necessary for years to come. Early estimates show that 2021 sales could total $9.6 billion, and depending on the vaccine’s immunity, sales could still be as high as $6.8 billion by 2023. With government dollars from Operation Warp Speed footing a large portion of the R&D costs, successful biotech companies stand to benefit for years to come. Moreover, a successful COVID-19 vaccine could be a PR boon for biotech; a Gallup poll revealed that US citizens view the pharmaceuticals as the most negatively regarded US sector. A vaccine could cover for years of negativity surrounding inflated drug prices and unethical marketing.

DoorDash IPO
DoorDash filed their S-1 this Friday in anticipation of their public listing. They expect to begin trading on the NYSE in mid-December at around a 25-billion-dollar valuation– up from 1.4 billion in 2018. They plan to use the proceeds for general corporate purposes, working capital, operating expenses, capital expenditures, and potential acquisitions or investments. Aided by a surge in at-home dining due to covid, DoorDash posted 23 million in profits this quarter and saw major increases in revenues. The food delivery market has become increasingly competitive as companies continue to enter the market and others like Uber and Postmates consolidate. DoorDash still remains in a strong position, commanding about half of the US market and making it the largest player in the country. Food delivery companies also recently benefited after California’s vote allowed them to continue classifying drivers as independent contractors rather than employees. Goldman will be the lead underwriters for the deal.

Cano Health Merger with Jaws Acquisition Corp
Jaws Acquisition Corp, a SPAC run by Barry Sternlicht, is planning to merge with Cano Health. The deal values Cano Health at around 4.4 billion, including debt. As a part of the deal, Cano Health will receive around 800 million in investments. Cano Health is a healthcare provider for senior citizens with operations in Texas, Florida, Nevada, and Puerto Rico. Cano primarily offers the private equivalent of Medicare for seniors.

Spotify Acquires Megaphone
Spotify recently announced its 235-million-dollar acquisition of Megaphone from Graham Holdings Co. Megaphone is a podcast advertising and publishing company, and Spotify aims to increase its advertising business through the acquisition. Megaphone serves podcasters and helps them advertise more effectively to their audiences. The acquisition will expand Spotify’s current ad technology and will extend its podcast branch, which Spotify has been aggressively building the past few years with acquisitions like Gimlet Media and Parcast Studios. Podcasts are increasingly becoming a space for big advertisers.